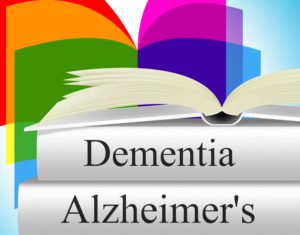 It’s true that the differences can be very confusing, and that confusion can lead to unnecessary worry and stress. That’s why we’re taking a closer look at how Alzheimer’s differs from other forms of dementia and how cognitive changes of all types can affect patients’ families and caregivers. The good news is that there are more resources for help with an Alzheimer’s diagnosis, or dementia more generally, than ever before.

Alzheimer’s is a specific disease

The Alzheimer’s Association defines the disease as “a type of dementia that causes problems with memory, thinking and behavior. Symptoms usually develop slowly and get worse over time, becoming severe enough to interfere with daily tasks.”

There are early warning signs and symptoms that may suggest a person has Alzheimer’s, but it is important to remember that only a doctor can make the disease diagnosis. If you suspect that a loved one may have Alzheimer’s, they need to schedule a visit with a trusted family doctor right away. Simple medical testing can reveal whether it truly is Alzheimer’s.

Alzheimer’s manifests with the development of abnormal structures known as plaques and tangles in the brain. These structures damage and kill nerve cells as they grow and spread. And while many non-Alzheimer’s patients may also develop plaques and tangles as they age, the disease causes more of them to grow, and in predictable patterns that always start in the areas of the brain most responsible for memory. This means that Alzheimer’s always causes memory loss at the outset and progresses to problems with communication, personality changes, and severe cognitive impairment over time. Unfortunately, there is no cure for Alzheimer’s today.

Scientists and medical researchers are not sure what makes some people develop Alzheimer’s as they age while others do not. Genetics appears to play a strong role, but studies have suggested that other factors, like head injuries and heart health issues, may increase an individual’s risk for the disease.

While age is considered one of the main risk factors for developing Alzheimer’s, the disease can actually begin to take hold for some individuals in their 40s. It’s never too early to talk to your doctor about your risks.

Dementia is a broad term

As we mentioned, some non-Alzheimer’s patients can develop plaques and tangles in their brains that cause cell damage that results in memory loss as they age. This memory loss may be diagnosed as dementia. The term “dementia” is so generalized, though, that it may also be applied to cognitive problems that manifest after a stroke (vascular dementia) or even milder, reversible impairments caused by vitamin deficiencies.

Medical professionals generally agree that for disruptive cognitive changes to be considered dementia, a patient must have at least two impairments from the following list:

It’s true that dementia can be a symptom of many other diseases and disorders beyond Alzheimer’s, some of which are completely treatable. This doesn’t mean that dementia is not serious or life-disrupting, and it may not be curable either. Working with your doctor, educating yourself about the root causes of your loved one’s dementia, and connecting with support resources are some of the best things to do after a diagnosis is confirmed.

While a diagnosis of either dementia or Alzheimer’s can be scary for patients, it’s also extremely stressful for family members, caregivers, and other loved ones. Those closest to the patient may experience a sense of loss and grief as strong as if their loved one had passed away.

The diagnosis may also magnify family tensions and cause conflict between individuals and groups of people involved in the patient’s life. Sadly, an Alzheimer’s or dementia diagnosis can often create irreparable rifts in families. This does not need to happen, however.

Counseling and support group resources are available in many local areas. These are designed to ensure that families and patients dealing with a tough diagnosis can connect with others who understand what they are going through, which often helps alleviate stress and hurt feelings.

Help is available no matter the diagnosis

Beyond counseling and support groups, there are also many professional memory care options available for patients, which ease the burden of worry for family members and loved ones. Some of the strongest options are retirement community-based support and services, which may involve moving to a retirement community campus. For example, here at Calvary Homes, we have been offering premium memory care services for decades in our Garden View memory loss care unit.

At Garden View, residents who need supervision and assistance with aspects of their daily routines due to memory loss are provided with secure indoor and outdoor common spaces to enjoy, as well as their own private rooms. Help is always close by, though residents are encouraged to be as independent as possible within the unit. Plenty of specially-designed programs and activities are offered to enrich our residents’ lives, as well.

Are you currently working through a dementia or Alzheimer’s diagnosis for yourself or a loved one? Or do you simply have questions as you enter retirement? We’d love to connect with you! Get in touch with our caring and compassionate team at Calvary Homes and learn more about all of the services we offer.